BrassNeck took the challenge of taking one of the world’s best-known musicals and adding their distinctive and contemporary twist to it.

The traditional story of Tevye, a poor dairyman, trying to instil in his five daughters the traditions of his tight-knit Jewish community in the face of changing social mores and the growing anti-Semitism of Czarist Russia, was re-imagined as a fable being told by Jews ostracised in second world war-torn Krakow.  This angle added layers of resonance to the historical and ethnic detail.

Fiddler on the Roof has touched audiences around the world with its humour, warmth and honesty. It’s universal theme of tradition cuts across barriers of race, class, nationality and religion, leaving audiences crying tears of laughter, joy and sadness.

I have to admit at the outset that Fiddler on the Roof is one of my favourite musicals with such a moving storyline and I was certainly not disappointed with BrassNeck Theatre’s production of this show this week at Yeadon Town Hall.

Royston Bayfield, the producer, has honed this production to perfection and every single member of the cast gives 110 percent. Royston has also taken the bold step of twisting the ending of the story by placing it in the Jewish Ghetto in Krakow in 1943 which gives it a very dramatic final ending.

The story centres on Tevye, the father of five daughters, and I have to say that Richard Lloyd, head of drama at Beckfoot School in Bingley gave an outstanding performance in this role. 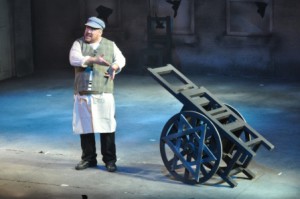 Dramatic, full of character and yet poignant at times when it was needed, this is one of the best performances of this character I have seen.  His singing was superb and his acting personified the character being played perfectly. What a great rendition of If I Were a Rich Man he gave!

Another great performance came from Laura Judge as his wife Golde and Richard and Laura combined very well together in the musical numbers Sunrise Sunset and then Do You Love Me?  Other cast members I must give plaudits to include Helen Wrigglesworth as Tzeitel, Robyn France as Hodel and Lydia Bradd as Chava who combined very well in Matchmaker where their harmonies were superb plus also Tom Kyle as Motel and Sam Chipman as Perchik.  I thought Lydia has an excellent voice whilst Robyn France was superb in Far from the Home I Love.

Helen Wrigglesworth as Tzeitel and Tom Kyle as Motel

Tom performed well in Miracle of Miracles whilst Sam was very confident and dramatic in Now I Have Everything. I last saw Sam playing Lt Cable in South Pacific at Guiseley a couple of years ago and said at that time whilst he was a little weak, because of his young age, I was sure he would mature as a performer and this has certainly been the case.  He is now much more assured and I am sure will have many more leading roles in the future.

Although there are only two or three main chorus numbers, these were outstanding.  The opening number Tradition set the scene with some excellent singing and the male chorus performed very well in To Life with some great dance movements.  The final number in the musical, Anatevka, brought a touch of great poignancy at the end of the production, again with some superb harmonies from the chorus.

Brassneck perform Fiddler on the Roof

I must give congratulations to Musical Director Cathy Sweet for some outstanding chorus work and also Choreographer Briony Marston for some exquisite dance routines.  Thirty people on the stage at one time at Yeadon are a lot to move around in a limited space but Briony managed this superbly.

A great show by this extremely talented company! I look forward with anticipation to their next production of Whistle Down the Wind in May 2013.

What the audience said about Fiddler on the Roof

"Congratulations on an amazing production once again. The setting was provoking and poignant. The time flew by, so slick were the scene changes. Performances were both funny and moving, but special mention must go to Richard; that’s how it’s done! Looking forward to the next one already."

"Wonderful production of Fiddler,enjoyed every minute.cast,lighting.sound.set were excellent. Well done everybody involved with this super production."

"Well done to everyone involved with Brassneck’s production of Fiddler, really enjoyed the whole thing."

"… thoroughly enjoyed the show which of the very high standards we have come to expect from Brassneck. One of the highlights for me was the set which was so different to any other Fiddler set which I have seen – it was superb and added so much to the show. You had an excellent cast and ensemble with each clearly knowing who they were within the community they portrayed. Both your director and choreographer had done a lot of research into Jewish traditions of the period."

"REALLY enjoyed BrassNecks Fiddler on the Roof this evening and a wow to the crazy amazing set too! If you can get tickets do!"

"Thank you to everyone at Brassneck for a wonderful production of Fiddler on the roof last night, we really enjoyed the show"

"Many congratulations on yet another outstanding performance. Fiddler on the Roof was absolutely brilliant. You must all be thrilled! Well done and we can’t wait for Whistle Down the Wind! Thank you to you all! Have a well deserved rest!"

"Congratulations to BrassNeck Theatre for yet another really TOP quality show. Fiddler is such a strong story and the way it was portrayed this week captivated the audience and drew us on to the stage with you. Maybe that’s the reason there wasn’t so much screaming from the seats tonight. But don’t worry – you’re all bloody brill. Well done!"