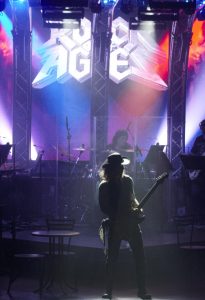 Rock of Ages takes you back to the times of big bands with big egos playing big guitar solos and sporting even bigger hair!

The 1980s themed musical is built around classic rock hits of that decade, especially from the famous ‘glam-rock’ bands of the era.

The songs include:
Don’t Stop Believin’
We Built This City,
The Final Countdown
Wanted Dead or Alive
Here I Go Again
Can’t Fight this Feeling
I Want To Know What Love Is

The show tells the story of aspiring rock star (and resident toilet cleaner) Drew who longs to take the stage as the next big thing (and longs for small-town girl Sherri, fresh off the bus from Kansas with stars in her eyes).  But the rock and roll fairy-tale is about to end when German developers sweep into town with plans to turn the fabled Strip nightclub into just another capitalist strip mall.

“Artistically and technically it is sheer perfection. A superb production.”

Rock of Ages is a rock/jukebox musical, based on the book by Chris D’Arienzo, and built around classic rock songs from the 1980s, especially from the famous glam metal bands of that decade. The musical features songs from Styx, Journey, Bon Jovi, Pat Benatar, Twisted Sister, Steve Perry, Poison and Europe among other well-known rock bands.

During the performance, the performers frequently break the “fourth wall”, directly addressing the audience and seemingly forgetting (or perhaps reminding the audience) that they are actors in a musical and that it is a show, not real life. Despite the musical’s title, the Def Leppard song of the same name is however not included in the musical.

There are, however, many songs in the show that the audience will instantly recognise- We Built this City (On Rock and Roll), More Than Words, Waiting for a Girl Like You, I Want to Know What Love Is, Harden My Heart, The Final Countdown, Can’t Fight This Feeling, Every Rose Has It’s Thorn, Keep On Loving You and Don’t Stop Believing.

Lonny Barnett, who serves as the show’s narrator, sets up the story: In 1987, an aspiring rocker named Drew Boley works as a busboy in the Hollywood bar/club called the Bourbon Room, owned by Dennis Dupree and assisted by Lonny. He falls instantly for a girl, Sherrie Christian, who just arrived from Paola, Kansas, hoping to make it big in acting. Drew convinces Dennis to hire Sherrie as a waitress. A pair of German developers, Hertz Klinemann and his son Franz, persuade the city’s mayor to abandon the “sex, drugs and rock-n-roll” lifestyle of the Sunset Strip and introduce “clean living” into the area, much to the anger of the City Planner, Regina. When Dennis learns that part of the plan involves demolishing The Bourbon Room, he believes the club can generate more money by having rock star Stacee Jaxx and his band Arsenal, who recently announced their break-up, perform their last show at the Bourbon. He calls Stacee and convinces him to play the band’s last show in the club where he had begun. As Drew struggles to write new lyrics, Sherrie urges him to go after his dreams. Stacee arrives at the Bourbon and immediately Sheree is smitten by him. Thus begins a twisted love triangle that continues throughout most of the musical. There is, however, a happy ending, but I will leave those going to see the show to see exactly what that is. 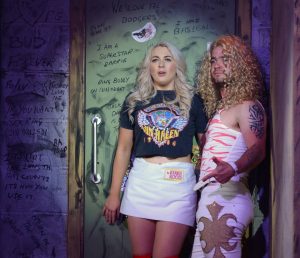 Outstanding in the role of Sheree is Brogan Hollidrake. I have known Brogan (a former Scala Kids performer) for over ten years and have seen her in many productions both for BrassNeck and also other local societies. This, though, is her best performance yet that I have seen. Strong powerful singing, great acting, her performance is one of the many highlights of the show. She is extremely well supported by Nigel Passey as Drew, again with an excellent singing voice and Ben Tomlinson as Stacee. Ben too has an excellent voice and a great stage presence. Adding a touch of humour to the proceedings were Phil Yeadon as Lonny and Richard Lloyd as Dennis. Their duet of “Can’t Fight This Feeling” was another highlight of the show for me. Emily Kyle is superb as Regina and there are also brilliant performances from Richard Mace as Franz, Andrew Walton as Hertz and Paul Chewins at the Mayor.

Tom Kyle is the musical director for the production and the band he has put together can be described in one word – outstanding! Iron Maiden and Def Leppard – eat your heart out. The lead guitar playing by Dan Pearce, a guitar teacher by trade and in the band The Z List, is absolutely amazing and the band’s backing harmonies for a number of the songs are superb.

There is great choreography in the show and plaudits must go to Sarah Joice and Donna Woodman the joint choreographers. Also plaudits to Barbara Matthews and Helen Green for the brilliant wigs and costumes being used by the cast which add great authenticity to the show. Finally, I cannot finish this review without mentioning Royston Bayfield the Director. Royston has directed many local shows over the years but this has to be one of his best. Both artistically and technically it is sheer perfection. A superb production.

Rock of Ages ran in May 2017 at Yeadon Town Hall

What the audience said about Rock of Ages

"What a bloody fantastic show. Loved every minute!"

"An incredible show. Singing was out of this world!"

"What a show! Absolutely brilliant from the stage setting, rock band to the most talented cast!"

"Brilliant! Don't think I've laughed so much for ages! Standing ovations all round!"

"I've got a headache from laughing so much! Fantastic show!"