In The Wedding Singer, it’s 1985 and rock-star wannabe Robbie Heart is New Jersey’s favourite wedding singer. He’s the life of the party, until his own fiancée leaves him at the altar.

Shot through the heart, Robbie makes every wedding as disastrous as his own.

The Wedding Singer is based on the mega-hit film starring Adam Sandler. 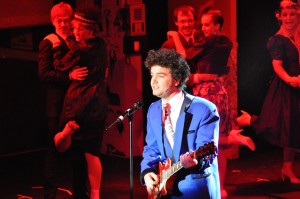 The Wedding Singer, the musical based on the popular film starring Adam Sandler and Drew Barrymore, is the story of Robbie Hart, a wedding singer whose own luck in love leaves him desolate, blind to the perfect woman standing right in front of him. Chock full of salutes to 80s pop culture, The Wedding Singer transports us to the New Jersey shore to find true love in a sea of tulle, layered cakes and first dances.

Ah, the ‘80s! A simpler time; Michael Jackson was still alive and at the height of his fame, and the battle was still raging on as to who would have the more successful solo career – George Michael or the other guy from Wham! It was the decade that saw personal computers, the Walkman, CD players, cell phones and home video become widely available. It was a strange and hilarious decade that set the stage for where we are today. 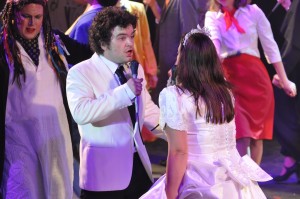 It’s easy to look back and laugh at a decade that is safely in the past, to mock questionable fashion choices, ridiculous commercials and cheesy music. Hindsight is 20/20, though, and who is to say that in 30 years there won’t be a musical set in 2014 that will make endless fun of reality TV and our lack of flying cars.

Once again with The Wedding Singer BrassNeck Theatre has produced a performance that is stunning both from a musical and a chorographical point of view. Filled with humour, powerful 1980s-style music and the inevitable romance, The Wedding Singer is a sure-fire hit for both those who lived through the Eighties and for those who missed out.

Given the inevitable constraints of the stage at Yeadon Town Hall, producer Royston Bayfield has worked wonders with his technical crew to put on a fabulous production that is worthy of gracing any of the theatres in the West End. 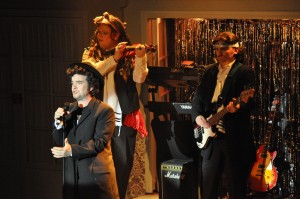 Outstanding in the performances of the principals has to be Ben Tomlinson as Robbie. For the two hours of the production he is hardly ever off the stage. A seasoned performer, having acted since the age of four, his timing is superb, as is his singing with a brilliant range – strong for the rock numbers yet gentle for the ballads. He is ably supported by the leading lady, Lisa Simpson as Julia.  Again, here is a performer with a brilliant vocal range and when they harmonised together, as in the number If I Told You, here was sheer musical perfection.

Robbie’s two band members, Tom Kyle as Sammy and Adam Folkard as George (A Boy George lookalike) were also excellent with their performances as were Emily Taylor as Linda and Rachel Sowerby as Holly. These six principals were ably supported by Chris Slater as Glen, Christine Castle as Rosie, Robbie’s grandma and Ann Garnett as Angie, Julia’s mother. A further seventeen members of BrassNeck made up the chorus whose contribution was paramount to the overall success of the production with their superb singing and choreography.

The Company of The Wedding Singer

Final plaudits must go to Cathy Sweet, the Musical Director, who led her musicians superbly. This is a very complex score at times but they handled it expertly and provided great backing for the principals and chorus. And plaudits also to Donna Woodman, the choreographer, whose dance routines sparkled as much as the glitter balls at the end of the show.

A great show, expertly directed by Royston Bayfield, which I am sure will be enjoyed by the audiences throughout the rest of the week.

The Wedding Singer ran in May 2014 at Yeadon Town Hall

What the audience said about The Wedding Singer

"LOVED seeing The Wedding Singer tonight at Yeadon Town Hall! From the punchy opening number to the fabulous ballads, we enjoyed every minute of the show! Well done to all the cast, some outstanding performances and lots of comedy moments."

"That was amazing!! I wasn't sure what to expect but that was fantastic! Totally loved it!"

"I thought that was amazing, really enjoyed it! You were all great, really well done!"

"Fantastic show, The Wedding Singer by BrassNeck at Yeadon Town Hall!!! Well done everyone!!! Wish I could see it again."

"Wow wonderful evening at Yeadon Town Hall watching 'The Wedding singer!' What an amazing job you all did!! Well done to all!! Loved it!!"

"Just arrived home from seeing this amazing show. Guys you were outstanding tonight. Thank you so much. I really have no words...... Well done."

"Such a wonderful and outstanding production. As usual BrassNeck put on a breath-taking show...one of my party who had not seen a BrassNeck show before commented that it was equal if not better than the West End show. "

"Phenomenal cast, orchestra were amazing and that BrassNeck have excelled themselves!!"

"I can honestly say that the Wedding Singer was a marvellous production. Yeadon Town Hall was rocking with music and laughter and all the cast were superb. This would give anything in the West End a run for it's money it was magical...made my day watching you all having such a great time. Loved it, loved it, loved it!"

"I had to let everyone know that last nights opening performance was one of the best sounding productions with one of the strongest all round line ups I have seen in a very long time."