Avenue Q is not the most upmarket of New York streets, and is about as far away from Park Avenue as you can get, but it is home to some lively and off the wall characters performed by an unholy comedic alliance of humans and puppets! Princeton, a bright-eyed college graduate, has just moved to this neighbourhood as he desperately tries to follow his dreams and discover his ever-elusive purpose in life. A tiny bank balance, the distraction of a busty blonde and a variety of weird and wonderful friends and neighbours lead Princeton on a hilarious story of self-discovery.

Avenue Q was the winner of the 2004 Tony Award for Best New Musical, Best Book of a Musical and Best Original Score.

Have you ever wanted to go back to college? Wondered why you didn’t have a boyfriend? Or… perhaps… had a one night stand with a monster?

If so, welcome to Avenue Q; you’ll fit in just fine.

BrassNeck Theatre’s current musical offering centres on an unlikely collection of dissatisfied characters (from monsters, to out of work comedians, to 80’s child star Gary Coleman), looking to move forward in their careers, their love-lives, and even, if they possibly can, find their purpose in life.  With the slick production values that are now synonymous with both BrassNeck Theatre and the direction of Royston Bayfield, Avenue Q skilfully presents a unique combination of puppets and crudity to create (for those of us old enough to remember it) an adult version of Sesame Street. 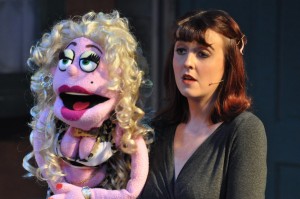 Gemma Durkin with Lucy the Slut

The show’s lovable characters are created by a stunning cast. Gemma Durkin’s performance as Kate Monster is superb. Her vocals are uplifting and I felt genuinely moved by her rendition of ‘There’s A Fine, Fine Line’ – no mean feat when sharing the stage with a felt doll. The character of Lucy, also played by Gemma, provides the perfect opportunity for her to show off her vocal range as well as her versatility on stage. Equally strong is Tom Kyle’s portrayal of Princeton. Tom also plays Rod; the seamless transitions from one character to the next, as well as the progression in the character of Rod, are both to be applauded. 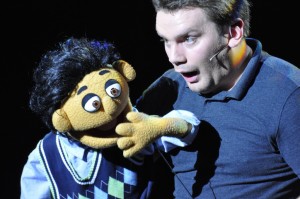 Among the other residents of Avenue Q, you’ll meet Christmas Eve (Emily Taylor), and Brian (Andrew Walton), both of whom give very strong performances. Emily’s lovely performance of ‘The More You Ruv Someone’ is a highlight and Andrew’s comic timing is sure to make you giggle.

Naomi Hurtault takes on the challenge of Gary Coleman (complete with catchphrase, ‘What you talkin’ ‘bout, Willis?’), and gives a confident performance that tackles some tricky vocals with ease. Richard Lloyd has the unenviable task of controlling two handed puppets with a number of other cast members, yet this is handled skilfully and Richard gives a comical portrayal of Nicky and brashly endearing rendition of Trekkie Monster.

Worth a special mention, I believe, are Ben Tomlinson and Nicky Burrows. While these actors had smaller roles and are often found switching from character to character as the need arose, the skill with which they did this gives the show a professional edge. The greatest compliment I can pay is that often I didn’t realise such a transition had taken place. Having said this, both actors are perfectly capable of making their presence felt when necessary – the portrayal of the Bad Idea Bears brings (even more) hilarity to the show. 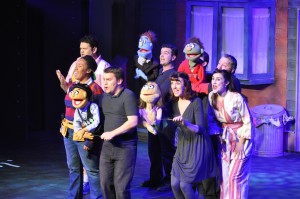 The cast of Avenue Q

Despite the unique nature of the acting required in this show, the characters are no less engaging and, to my surprise, I soon found myself touched by the monsters; commiserating with their mistakes and celebrating with their successes. Instead of the puppets seeming like accessories to the actors, the actors became simply extensions of the puppets. This is a testament to the puppetry of the cast. 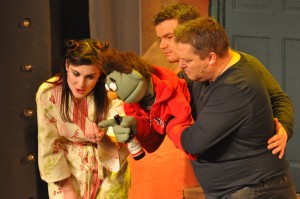 The set, costumes and lighting are all of a high standard; the windows open to reveal the chintzy granny-chic of Kate Monster’s front room and Christmas Eve’s dress lights up (I can’t resist this) like a Christmas tree. The band, under the direction of MD Cath Sweet, perform to a very high standard; it’s a shame that at times their volume seemed to overpower the singers. However this was rare, and quickly put to rights – this slick correction bodes very well for opening night.

This production is set to be another in a long line of successful shows from BrassNeck Theatre. Tickets are, amazingly, still available from the Box Office on 0113 2505011, and while possibly not suited for children, this musical is certainly one for the childish among us.

I will certainly be revisiting Avenue Q.

What the audience said about Avenue Q

"It was spectacular last night best show I’ve seen to date may be only a lil cast but man it was amazing never laughed so much in ma life. Shadenfreude or however it’s spelt."

"WOW what a laugh!! My eyes were streaming, my tummy ached!! Amazing skills with the puppets, didn’t know what to expect but knew Brassneck wouldn’t do owt crap – and I was right. ABSOLUTELY FANTASTIC show again by the Brassneck Crew."

"Funny funny funny, so clever. Once again you excel yourselves! If I could afford I would buy a Brassneck Theatre experience for everyone I know!! Well done"

"What a fantastic show Avenue Q!! Well done everyone!! As I have said before so proud to be part of a fantastic society!!"

"Fantastic show last night even better than Tuesday and Tuesday was brilliant… As I have said many times so proud to be part of such an amazing company!!! So much talent all round but also such a great band of lovely people!! Loved Gemma singing Fine Line so emotional. Well done everyone!!!"

"I just wanted to say how fantastic Avenue Q was last night; I love the show anyway, but I had a fabulous evening and thought all the performances were brilliant and the ‘puppet handling’ was excellent. It’s been a long time since I’ve laughed that much. I can only imagine how much hard work has gone into this one – it really showed. I’m coming back on Saturday night, and am really looking forward to another great night."

"wow, wow, wow – what an amazing performance tonight. I could have easily been in the west end. Such a talented cast, beautiful set – perfectly lit and seamless sound. All in all brilliant fun, definitely coming back tomorrow night!"

"Whilst driving to work this morning I was reflecting on my previous evenings viewing of the performance by Brassneck, of Av Q at Yeadon Town Hall . For those who know me, will know that I do not hold back on my views. It was f….ing brilliant!! Can’t wait to see it again. Congratulations to everyone concerned from front of house to the performers. Not a show to be missed."