Next Production – Sunshine on Leith

Sunshine on Leith 16th to 20th May 2023 – set to the classic songs of The Proclaimers.
A funny and moving show about Davy and Ally, who are returning to their hometown after serving in war-torn countries overseas and are questioning what ‘home’ really means…. 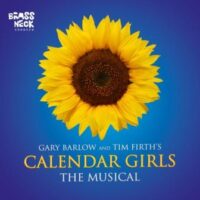 Review by John Burland: FIRST it was a film, then it became a stage play and in 2017 the story of those intrepid ladies from the Rylstone Women’s Institute was turned into a musical. At that time, it was entitled “The Girls” but subsequently reverted to the original title of the film and play of […]

"I’ve grown up with the film, and beautiful Yorkshire, Well BrassNeck, you did them proud. A delight to watch, from laughter to tears. Everyone ought to be extremely chuffed with themselves… particularly the outstanding calendar girls "

"Everything about this production is brilliant - superb principal acting and singing, ensemble that know who they are and have a story of their own, wonderful orchestra (17 piece) and detailed and enlightened direction which leads to clarity in the storytelling. Seriously, if you haven’t got a ticket for the show then get one. I was blown away by the whole thing and the journey that the cast take you on; bravo!"

The Brothers Grimm hit the stage with an epic fairytale about wishes, family and the choices we make. Now a Disney film starring Meryl Streep, Emily Blunt and Johnny Depp, James Lapine and Stephen Sondheim take everyone’s favourite storybook characters and bring them together for a timeless, yet relevant, piece…and a rare modern classic. The Tony Award-winning book and score are both enchanting and touching.