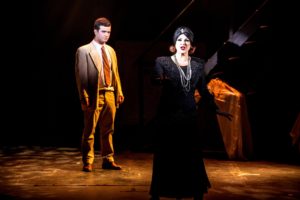 Sunset Boulevard is a compelling story of romance and obsession, based on Billy Wilder’s legendary film, with Don Black and Christopher Hampton’s wonderful book and lyrics.

In her mansion on Sunset Boulevard, faded, silent-screen goddess, Norma Desmond, lives in a fantasy world. Impoverished screen writer, Joe Gillis, on the run from debt collectors, stumbles into her reclusive world. Persuaded to work on a script that she believes will put her back in front of the cameras, he is seduced by her life-style. Joe becomes entrapped in a claustrophobic world until his love for another woman leads him to break free with dramatic consequences.

They are in my opinion one of the best local amateur theatre groups in this area and over the last few years have given the theatre going public some magnificent productions. And this current production of Sunset Boulevard is no exception. Whilst classed as an “amateur” group, BrassNeck are 100% professional in all that they do, whether this is singing, acting or their choreography. 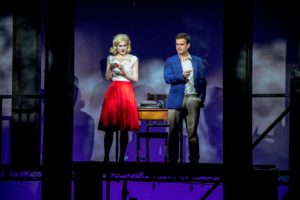 Sunset Boulevard is an Andrew Lloyd-Webber musical with lyrics by Don Black and Christopher Hampton. Don Black’s lyrical works include the themes to Thunderball, Diamonds Are Forever and Born Free which won him an Oscar in 1966. He also provided the lyrics for Lloyd-Webber’s musicals Tell Me On A Sunday and Aspects Of Love.

Both haunting and desperately sad, Sunset Boulevard revolves around the former star of the silent screen era, Norma Desmond. Aging and largely forgotten for years, she lives in her dilapidated mansion in Hollywood with her butler and chauffeur.  Lost in her memories, she is stirred into action when struggling screenwriter, Joe Gillis, suddenly enters her home and her life. 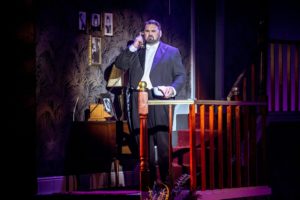 Every member of this eighteen strong cast play their part in making this such a memorable production but I must highlight certain individual performances as well. Firstly, Laura Judge in the role of Norma. What can I say about this performance? Sensational, outstanding, fab-u-lous as Craig Revell-Harwood would say. Laura’s acting and singing are simply out of this world. Her rendition of “As If We Never Said Goodbye” will bring a tear to your eye and a lump to your throat. Laura is extremely well supported by Ben Tomlinson as Joe. Ben also has a very big role to play in the storyline and he plays this with aplomb. Again an excellent singer and actor Ben brings all his many years on the stage to bear and produces a terrific performance. I particularly liked his renditions of “Sunset Boulevard” and his duet of “The Perfect Year” with Laura.

Supporting the two main principals were Andrew Walton as Max and Emily Kyle as Betty. Andrew’s superb bass-baritone voice was brought to the fore in his rendition of “The Greatest Star Of All” whilst Emily brought all her experience as a drama teacher into the role of Betty. Her duets of “Girl Meets Boy” and “Too Much In Love To Care” with Ben were excellent.

Royston Bayfield has once again produced an outstanding show ably supported by Tom Kyle as Musical Director and Stuart Hutchinson as choreographer. Together they have created an outstanding production which I am sure will be talked about for many weeks and months to come. There are still some tickets left for the final four performances, particularly for Saturday’s matinee. Tickets are available via the company’s box office or by phone on 0113 250 5011.

Sunset Boulevard ran in May 2019 at Yeadon Town Hall

What the audience said about Sunset Boulevard

"There is a lot to say about amateur actors. BrassNeck Theatre presented an amazing interpretation of Sunset Boulevard. A great night out."

"I've just got home after watching this production of Sunset Boulevard and I can honestly say it was better than the one I saw in London many years ago. The cast, the staging, the costumes and the orchestra were all fantastic. It gave me goose bumps it was so powerful and emotional Well done all at BrassNeck you really are a talented bunch. ????"

"That was mega - just loved it - not a weak link amongst it. Loved the band - that's one of the most important things for me and that was something else!"

"Congratulations to everyone at BrassNeck for tonight's performance, so much talent on one stage... it was stunning...we have goosebumps! Looking forward to seeing it again Saturday night. Hope you have a brilliant run, you definitely all deserve it. "

"It was fabulous! Thank you for a lovey evening. Amazing singing and costume!"

"Wow what an amazing show! Really well done to everyone! If you haven't got tickets yet make sure you do!!! Loved it! "

"Wow what an amazing show fantastic from start to finish. Fabulous performances from everyone. The orchestra are outstanding, production superb and stage, set and lighting out of this world! "