The Brothers Grimm hit the stage with an epic fairytale about wishes, family and the choices we make.

Now a Disney film starring Meryl Streep, Emily Blunt and Johnny Depp, James Lapine and Stephen Sondheim take everyone’s favourite storybook characters and bring them together for a timeless, yet relevant, piece…and a rare modern classic. The Tony Award-winning book and score are both enchanting and touching.

On the outskirts of the city lies a fantastical forest where curses are reversed and wishes can come true. In the shadows of the trees something magical, fanciful and strange is happening, but wishes are dangerous beasts to manage. Our story begins in a clearing not far from you…a Baker and his wife dream of a child, a flash of red captivates a tall, furry stranger and a girl with golden slippers is on the run. Each has a journey to make, a different path to take but are they certain it’s the right direction?

One of Sondheim’s most popular works, Into the Woods is a musically sophisticated show with the opportunity to feature actors adept at dark comedy. 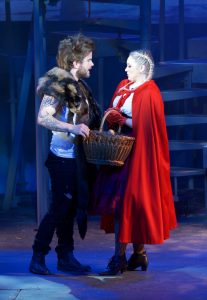 “Great performances – a production BrassNeck can be very proud of”

This is the eighteenth production by BrassNeck Theatre and without doubt has to be one of their most ambitious productions yet.

Into the Woods is a musical with music and lyrics by Stephen Sondheim and book by James Lapine. The musical intertwines the plots of several Brothers Grimm and Charles Perrault fairy tales, exploring the consequences of the characters’ wishes and quests. The main characters are taken from “Little Red Riding Hood”, “Jack and the Beanstalk”, “Rapunzel”, and “Cinderella”, as well as several others. The musical is tied together by a story involving a childless baker and his wife and their quest to begin a family (the original beginning of The Grimm Brothers’ Rapunzel), their interaction with a witch who has placed a curse on them, and their interaction with other storybook characters during their journey.

Sondheim’s music takes some getting used to with its many changes from major to minor keys, its diminished sevenths and augmented fifths. I felt this when I saw Sweeney Todd and again Into the Woods contains major and minor triads. However, the performers seemed to cope admirably with this, thanks to the work Tom Kyle the Musical Director

has spent with them. One of the performers said to me afterwards that this is one of the hardest musicals he has had to perform in, and this was from somebody with a wealth of theatrical experience.

There are some great performances from the actors in this production and all 18 members of the cast must be complemented on their achievements. However, I must single out half a dozen or so for their individual performances. Richard Lloyd and Lisa Simpson were excellent in their portrayals of the baker and his wife and their duet in It Takes Two was one of the highlights of the show. Caroline Bayfield was also outstanding as Cinderella as was Laura Judge as The Witch. Emma Fearnley turned in a great performance as Little Red Riding Hood and I must particularly mention Malachy Bray, the young narrator who turned in a performance well beyond his tender years. Also, that doyenne of local theatre, Christine Castle as Granny.

These were well supported by Richard Mace as Jack, Marie Collins as Jack’s mother, Anna Riley as Cinderella’s Stepmother, Brogan Hollindrake as Florinda and Pip Barton as Lucinda the two Ugly Sisters, Andrew Walton as The Mysterious Man who both my wife and I thought was I thought was a “Hagrid” look-alike, Nigel Passey and Ben Tomlinson who brought much humour as the two princes, Anthony Gilmartin as The Steward and finally Katie Kelly the show’s Dance Captain in her role of Snow White. 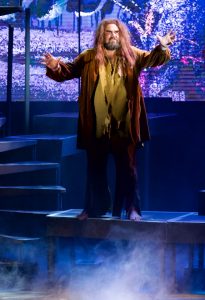 As usual, the show was excellently produced by Royston Bayfield with some superb choreography from Donna Woodman. I must also mention the sound and lighting teams led by Oliver Trenouth and Paul Dennison whose work added greatly to the production as did special effects courtesy of Neil Myers with the projections on the large screen at the back of the stage.

This was a very different production from ones we are used to seeing at Yeadon Town Hall, but one that BrassNeck can be very proud of. Some tickets are still available for the end of the week email: boxoffice@brassnecktheatre.com or ring 0113 250 5011.

Into the Woods ran in May 2018 at Yeadon Town Hall

What the audience said about Into the Woods

"It was absolutely incredible! ???"

"Just arrived home having been to see Into The Woods at Yeadon. Oh my goodness!! What a stunning production. Every single second is brilliant. The acting, the singing, the music, the staging, the choreography. A stellar cast of every super talented leading lady and man in the area. You'd pay a fortune in the west end to watch a show of this calibre. Thankyou BrassNeck for a memorable evening - I hope you get the audiences your performances so rightly deserve - you are awesome!!!!"

"A big thank you to all the brilliant cast, musicians and all involved in tonight’s performance of ‘Into the Woods’ - my son and I loved it. As good as any professional performance!"

"Last night's performance of Into the Woods was superb! There aren't enough superlatives to describe how fabulous everyone was. What a great Company to attract so many talented people."

"Wow, what an amazing production Into the Woods was last night at BrassNeck Theatre! Every single person was amazing! Also the band and the sound!!!! Amazing!! Well done all!"