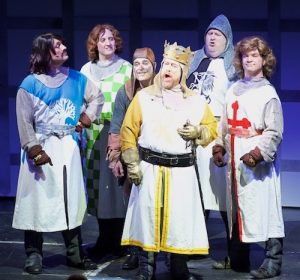 A new musical lovingly ripped off from the film “Monty Python and the Holy Grail”, Spamalot tells the tale (loosely!) of the Knights of the
Round Table as they join King Arthur on his quest for the Holy Grail. Taken from the original screenplay by the comedy genius team of Graham Chapman, John Cleese, Terry Gilliam, Eric Idle, Terry Jones and Michael Palin, Spamalot takes King Arthur’s band of questionable Knights from Camelot (via Finland) on a journey that brings them face to face with Finnish villagers, lewd French soldiers, various barnyard animals, the Knights of Ni and the mystical enchantress, the Lady of the Lake in a riotous adventure that will leave you weak with laughter.

“One of the funniest musicals I have seen in years”

Monty Python’s Spamalot is a musical comedy adapted from the 1975 film Monty Python and the Holy Grail. Like the film, it is a highly irreverent parody of the Arthurian Legend, but it differs from the film in many ways. The title of the musical comes from a line in the movie which goes: “we eat ham, and jam, and Spam a lot.” As a massive Python fan in the 1970s, this was one production I felt I could not miss and I was certainly not disappointed.

BrassNeck Theatre Group is in my opinion one of the best local amateur groups in the Wharfedale and Aireborough area. BrassNeck was formed by the merger of The Grove & Rawdon Theatre Company and Stampede Theatre Company in January 2010 and has grown from strength to strength in the intervening six years. 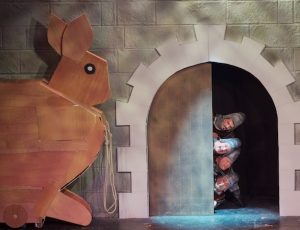 Spamalot tells of King Arthur’s quest to find the Holy Grail accompanied by his manservant Patsy and then the various knights he recruits along the way – Lancelot, Robin, Galahad and Bedevere. On their journey they are confronted by dancing girls, flatulent Frenchmen and a killer rabbit! All the scenarios one would expect from the writers of Monty Python.

It is a hilarious production with some classic one-liners and some extremely catchy music along the way. King Arthur is played by Richard Lloyd who has a brilliant stage presence as one would expect from someone who is head of drama at one of the top-ranking local secondary schools. He has a great baritone voice which was used to great effect in King Arthur’s Song, All for One, and particularly I’m All Alone. He was very well supported by Mike Riley as Patsy who to me was very much in the mould of Baldrick out of the Black Adder series. Again, Mike was outstanding particularly in the lead of Always Look on the Bright Side of Life. I must also give special mentions to Stuart Hutchinson as Sir Robin who was superb with his singing of You Won’t Succeed on Broadway, Ben Tomlinson as Sir Galahad, Paul Rookes as Sir Lancelot and Anthony Gilmartin as Sir Bedevere. Two other principals also shone out for me, Richard Mace as Prince Herbert and whose campness would give Louie Spence a run for his money and Marie Collins as The Lady of the Lake. Marie played this part superbly, it was truly “over the top” which is just how it should be done and her singing was excellent in Come With Me and The Diva’s Lament. 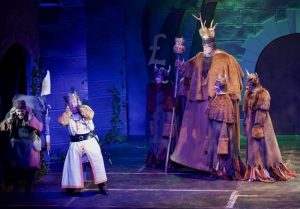 As always, the show was superbly directed by Royston Bayfield with very good use of the whole stage whilst the singing by both the principals and chorus was excellent under the direction of Cathy Sweet. There is some great dancing in the show, and plaudits must be given to Sarah Joice for her excellent choreography in this respect.

I know the show is sold out for Friday and Saturday evenings but there may still be tickets left for Wednesday and Thursday evening and Saturday Matinee. If there are, I would recommend you get along to Yeadon Town Hall for what is one of the funniest musicals I have seen in years. To book ring 0113 2505011 or book online here.

What the audience said about SPAMALOT

"Monty Python at its very best. Amazing production, couldn't have seen better on Broadway - congratulations and well done everyone."

"Now that's what I call an opening night! Utterly brilliant! Well done to all involved."

"Just spent a fantastic evening watching Spamalot....Thankyou for giving us an evening of laugh after laugh...!"

"WOW been to see BrasNeck's production of Spamalot - just as good as the west end show - well done all - Great songs - chortles- Python script and gags - If you want some feel good fun - get there to Yeadon town Hall!"

"BrassNeck were absolutely fantastic - I loved every minute! Very funny and they did monty python proud."

"Seen this in London and at Leeds Grand. As good as both of those productions. Wish I could see it again this week. MORE nights please!"

"A great night at Yeadon Town Hall watching Spamalot - well done to everyone involved in this fantastic funny musical! It's not to be missed."

"Everyone involved in this production deserves credit for providing a fabulous night out!"

" A thoroughly great evening. A very entertaining and funny show with great performances from the cast, ably supported by a very accomplished band."