The Addams Family features an original story, and it’s every father’s nightmare. Wednesday Addams, the ultimate princess of darkness, has grown up and fallen in love with a sweet, smart young man from a respectable family. A man her parents have never met. And if that weren’t upsetting enough, she confides in her father and begs him not to tell her mother. Now, Gomez Addams must do something he’s never done before — keep a secret from his beloved wife, Morticia. Everything will change for the whole family on the fateful night they host a dinner for Wednesday’s “normal” boyfriend and his parents.

Come meet the family. We’ll leave the lights off for you. 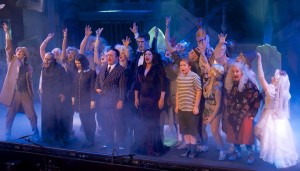 In the early 1970’s one of my favourite TV programmes was The Addams Family, the ghoulish adventures of Gomez and Morticia Addams and their very strange family. It ran for 16 episodes between September 1973 and December 1973 but has had many repeats over the last 40 years and still can be found on various channels throughout the world.

In 2007 the Charles Addams Foundation (Charles Addams had created the original comic book and TV series) agreed that a musical based on Addams’ cartoons could be written and it received its premier in March 2010 on Broadway.

It is now available for amateur groups and I was highly delighted therefore when I heard that BrassNeck Theatre was performing it at Yeadon Town Hall. And what a fabulous performance it turned out to be. With a cast and chorus of twenty three members they have produced one of the funniest and most brilliant musicals I have seen for a long time.

Royston Bayfield the Director along with Cathy Sweet the Musical Director and the two choreographers Donna Woodman and Sarah Joice have done a tremendous job with the production side making this very slick, fast moving and all together delightful evening’s entertainment. 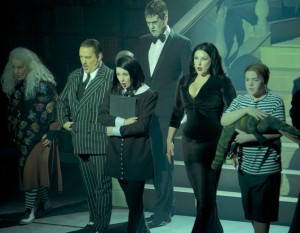 background. She has invited Lucas and his parents Alice and Malcolm to dinner at the Addams family home – a most gruesome place. Her aim is to get her parents to agree to the two of them marrying, something she knows will not be easy. Twists and turns in the plot, including the scheming of her younger brother Pugsley, make this a most amusing tale.

The ten principals were all excellent but outstanding praise must go to Richard Lloyd as Gomez and Brogan Hollindrake as Wednesday. Both of these are big parts – Gomez for example having nine solos or duets as well as the chorus numbers whilst Wednesday has four numbers plus the cast numbers. Richard, as befits the head of drama at one of our local secondary schools played his part immaculately with a spot-on Spanish accent and his singing was tremendous. I eulogized about his role as Tevye in Fiddler three years ago and this performance is on a par with that. Brogan has matured over the last few years into a great performer and whilst I thought she was good in Little Women last November this performance from her transcends way above her role as Beth in that musical – great singing, superb acting, what more can I say. 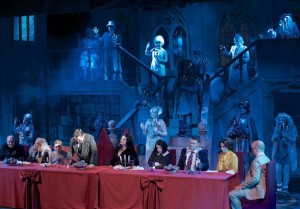 There are some great catchy numbers in the show and I must highlight the chorus (who are all the zombie ancestors) for their superb work in “When You’re an Addams”, “One Normal Night”, “But Love”, “Full Disclosure” and “Move Toward the Darkness”, and also Richard and Laura for their duets “Live Before We Die” and “Tango D’Amour” with it’s superb tango dancing which I am sure would justify a “10 from Len”!

The set design by Peter Stebbings was outstanding as was both the lighting by Paul Dennison and his team and the sound quality by Oli Trenouth and his team.

As I said earlier this is one of the funniest and best amateur shows I have seen for a long time. As one of the audience near me said at the end, “That would not be out of place by this group in the West End”. High praise indeed!

The evening performances of the show are practically sold out but there are some tickets still for Saturday at the 1 pm matinee – book online or by phoning 0113 250 5011.

The Addams Family ran in November 2015 at Yeadon Town Hall

What the audience said about The Addams Family

"Went to watch Addams Family tonight at Yeadon...everyone was fantastic including the band you couldn't fault anything. ..Well done to all involved!"

"Loved the Addams Family last night. The show was as professional as always with a mind-blowing set, fab costumes and great story telling. Can't wait to see The 39 Steps!"

"It was absolute class from start to finish......me, my grandma, mum and dad loved every minute of it."

"All i can say about tonight's performance of the Adams family is "truly AMAZING!!""

"Wow, wow, wow lost for words! brilliant everything, staging, lighting, each and every principal and a special mention to the ghosts/dancers who brought it all together. We want to see it again!!!"

"Fab night at The Addams Family. Slick, professional, West End standard and not one weak link in the cast."

"Massive congrats to everyone involved in The Addams Family from BrassNeck Theatre, another stunning show, faultless in execution and brilliant fun!"

"Yet another cracker! faultless, fabulous and fun..."

"It was just superb - everything about it!! It would grace the West End any day."

"The whole performance was brilliant, professional & hilariously funny....congrats to all!!"