When BrassNeck Theatre present their version of the rock opera Rent later this month, one of their members may be forgiven for feeling more nervous than most.

Renowned director Royston Bayfield has swapped his behind-the-scenes role and is preparing to take on the challenging role of Benny in Jonathan Larson’s much- acclaimed and decorated musical. 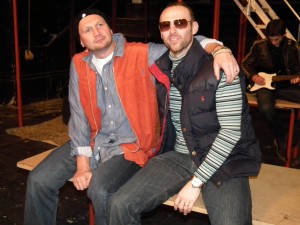 “I am probably more nervous for this role than I have been for a long time,” said Royston, who has directed all of BrassNeck Theatre’s productions so far, including The Producers in May and Bouncers and Shakers in September.

“Directing has a lot riding on it. Not only are you thinking about the show as a whole, but you also have to try and bring performances out of every actor on stage. I’d still prefer to be doing that though, as it’s years since I went on stage, but I’m enjoying the challenge.”

Over the years, Royston has directed more than 20 productions for both The Grove and Rawdon and latterly Stampede.

He has had some tremendous successes including We Will Rock You, which sold out and had a 500-strong waiting list, and The Buddy Holly Story starring the company’s Roger Rowley, who has gone on to reprise his role on the professional stage in the latest tour of the show.

“I’m lucky to have worked with some great actors on great shows, but now it’s my turn to try and show them that I can actually do it myself,” said Royston.

Rent is a modern rock opera based on Puccini’s La Boheme and is sure to be another hit for one of the most talked about companies in the area.

Taking over the director’s role is Andy Lunn, who has a wealth of experience behind him having directed at many of the country’s leading concert halls including Leeds Town Hall and The Royal Albert Hall. Andy has been working the cast hard and is impressed by Royston’s ability to switch roles with such ease. “Royston is a natural Benny and that’s why I gave him the role in the first place,” said Andy. “He had to audition just like everyone else and he is doing brilliantly, as are the rest of the cast.”

BrassNeck Theatre are presenting Rent at Yeadon Town Hall from November 15-19. Tickets can be obtained by calling the box office on 0113 2505011.