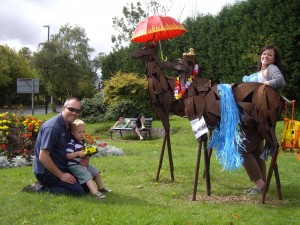 Sunday 28 August kicked off with the car treasure hunt, which saw carloads of members traversing West & North Yorkshire in search of clues, taking creative photographs along the way whilst also answering a number of brain-teasing quiz questions.  Around 10 cars set off from Yeadon Town Hall and, thankfully but well outside the anticipated timescale, all returned safely to Guiseley Bowls Club to eagerly await the result of the judges’ strict marking!  Controversy reigned over the ‘word search round’ but the judges stood firm and in the end it was a landslide victory to team “Crouching Hula, Hidden Tiger” comprising Lisa Simpson, Lotte McGuire, Jimi Clarke & Jamie Wilkinson.

The excitement didn’t stop there, however!  As if the enchanting aroma drifting across the bowling green from Tom Hughes’ barbeque wasn’t enough to keep everyone from going their separate ways there was the eagerly awaited bowls competition to come.  Last years’ surprise winners, Caroline Bayfield & Christine Braid, were keen to prove that it was no fluke last time whilst others were going through their respective pre-match routines determined not to be out-foxed by the all-girl duo.  Despite entering the competition as current champions, Bayfield & Braid were undoubtedly second favourites at best after former league bowlers Danny Lawton & Tom Weston decided that they would make up a formidable partnership and pair up together.  But as they say, in Crown Green Bowls anything can happen, and all competitors were keen to steal the glory.

Burgers were choffed and the beer flowed as the tournament got underway.

In the first round Barbara Matthews and Lewis Judge were put under pressure by the lighting boys Tom Hughes & Jason Beattie but came through 11-7, as did Pam Slater & Trevor Sugden, claiming victory over mother & daughter combo Loretta & Kim Marklew by the same margin.  Next up were Richard Lloyd & Jamie Wilkinson who were unfortunate to draw the sharks (although, interestingly, dressed as tigers) Danny Lawton & Tom Weston.  The 11-2 score line in favour of the sharks did not, in truth, reflect some of the sumptuous bowls delivered by both underdogs at various times.  It was simply the incredible consistency shown by Lawton & Weston that saw them stroll through to the next round.  Current champs Bayfield & Braid were up against Lotte McGuire & Robyn France.  For much of the match Bayfield & Braid had their backs against the wall in what was quickly turning into an all-girl thriller, however in the end the exuberance of youth was not enough to overcome the champions’ spirit as McGuire & France fell at the last hurdle and were dumped out 11-9.  Jimi Clarke & Royston Bayfield were next to step onto the green to take on the might of Jen Barnes & James Duffy.  It seemed no-one wanted to guess which way this one was going to go, but it was Clarke & Bayfield who made the early running.  Despite a valiant comeback by Barnes & Duffy, in truth they had left themselves too much to do, and Clarke & Bayfield progressed with an 11-6 victory.  All-Clarke combo Ian & Christine, having missed the beginning of the bowls action due to an incredibly late treasure hunt finish, had the might of Lisa Simpson and Ann Garnett to get past if they were to continue in the competition.  The general opinion from the gathering crowds was of a runaway Clarke victory but this match quickly turned into the second thriller of the afternoon as Simpson & Garnett fought right to the end before going down 11-9.  The final match of round one saw Andrew Walton & Tony Walker up against family unit Peter Stebbings & mother-in-law, Margaret Shingler.  A cool north-easterly breeze did nothing to keep either pairing supple whilst waiting for their turn to take to the green but nonetheless they strode out with purpose.  Both were scoring well and for a short time it was anyone’s call as to who would progress but in the end Stebbings & Shingler conquered over the weather and the Walton/Walker combo take the spoils 11-6.

So to the quarter finals.  Having both won by the same margin in round one, a close encounter looked on the cards as Matthews & Judge came up against Slater & Sugden.  Whether it was the pressure of the quarter finals or simple good luck in round one, perhaps we’ll never know, but either way Slater & Sugden could not match their earlier performance as Matthews & Judge waltzed through to the semi’s with a resounding 11-4 victory.  Dreams of a grandstand final between Lawton & Weston and Bayfield & Braid were shattered as they came up against each other in the quarters.  The harsh reality of this match was that the girls were no match for the sharks, although they did their best to distract the boys with some outrageous flirting and suggestive comments throughout.  Being accustomed to the pressure of competitive bowls and all the dirty tactics associated with it, the sharks were not troubled by these ‘below-the-belt’ tactics and made mincemeat of the girls, ending all hopes of retaining their bowls crowns.  Clarke & Bayfield found themselves up against Clarke & Clarke next.  Based on both round one performances the former looked like favourites, but who could tell how Clarke Jnr would perform when up against the might of his parents?  This looked for all the world to be a close contest, and so it came as a big shock to see Team Clarke wipe the floor with a runaway 11-2 victory.  The final quarter final saw a return to the green for Stebbings & Shingler as they faced Brian & Christine Luty who, consistent with the luck of old man Luty, had bagged a bye in round one.  Mutterings in the crowd suggested that whilst Luty & Luty were fresh off the bench, knowledge of the green could well pay dividends for Stebbings & Shingler, however it was Luty & Luty that got off to a flying start.  Ultimately, despite a valiant comeback, Stebbings & Shingler had left themselves too much to do as Luty & Luty advanced to the semi-finals with an 11-5 victory.

Semi-final one brought together Matthews & Judge and the sharks Lawton & Weston.  After two rounds it was clear to all that the sharks were the team to beat, but were Matthews & Judge the ones to spoil the party?  A romantic underdog story it might be, but sadly this was one tale that would never reach the back pages as Lawton & Weston showed their prowess in an 11-0 whitewash to take a place in the final.  Vying for a place alongside the sharks in the final were two family units; Clarke & Clarke and Luty & Luty.  Both had shown promise in the rounds leading up to this match and this really was too close to call.  As the light started to fade points were slowly being notched up by both teams, but in what became a reduced duration match Clarke & Clarke just pipped the Luty’s to the post with a 7-5 win. 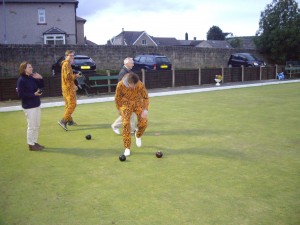 So, to the final.  Clarke & Clarke versus Lawton & Weston.  Deteriorating weather conditions drove all but the hardiest of spectators into the long room to watch from the sanctity & warmth it provided as the teams took to the green for the final match.    As if the pressure of the final wasn’t enough, the teams had to contend with playing under floodlights for the first time.  No-one was sure how this might affect the green or the mind-set of the players and this only added to the tension that you could almost reach out and touch.  Lawton & Weston got off to a flyer, both really showing their league bowling skills, as Clarke & Clarke fought valiantly to keep in the race.  Despite picking up the odd point, they really were never in the same league as the sharks who seemed to get better & better as the tournament wore on.  In the end Lawton & Weston triumphed 11-3 over Clarke & Clarke who were by no means disgraced by finishing runners-up in the face of some stiff competition throughout.

All in all a great day out for everyone involved, with special thanks for Richard Lloyd & Mark Brown for planning the treasure hunt, Tom Hughes for his usual barbequing skills and Andrew Baxter for the use of the Bowls Club and its facilities.

Next up on the social front, Strictly Come Dancing on Saturday 26 November 2011!  Tickets are on sale now.  See the latest newsletter or click here for the Facebook event for more details.