When the curtain goes up on BrassNeck Theatre’s production of Calendar Girls later this month there will be a certain air of anticipation to see how a company renowned for its innovative and ground-breaking musical theatre productions can turn its hand to a true-to-life moving play set in the midst of Knapeley W.I.  However, an enviable cast of talented ladies under the guidance of experienced play Director Ian Asquith are sure to leave audience members feeling thoroughly entertained by the fastest selling play in British theatre history. 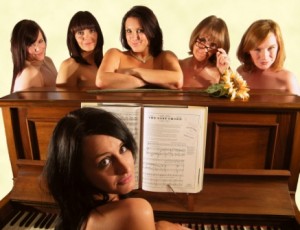 The original Calendar Girls of Knapeley W.I. posed nude for a calendar to raise money for the Leukaemia Research Fund, and the cast of BrassNeck’s production are determined to follow suit.  This season’s nominated charity for BrassNeck Theatre is Angelo’s Angels which raises money for Myeloma UK.  Angelo’s Angels was formed in 2007 by Angelo Clarke, a close friend of BrassNeck Theatre, after he was diagnosed with myeloma and the cast of Calendar Girls had no hesitation in offering to pose for a fundraising calendar of their own.  2013 calendars featuring the ladies of BrassNeck’s production will be on sale at every performance or by email, with all profit going directly to Angelo’s Angels.

Tickets for this much anticipated production of Calendar Girls are selling extremely well with the Friday performance already sold out.