Busman’s holiday for the Shakers girls

When the cast of BrassNeck Theatre’s up and coming production of John Godber’s Shakers take to the stage early next month, the girls will feel they are having a Busman’s holiday. The play is set in a trendy northern cocktail bar and the four girls in the cast play the down trodden waitresses; a real life role that each of them have already played.

Although Shakers has a cast of just four, the girls play around 20 roles between them, often playing several in the same scene. ‘It can be quite difficult to get you head around at times’ Said Jodie McEnery who plays wanna-be actress Nicky ‘most of the parts have a different accent and physicality too so we are always thinking about what’s coming next; particularly as, once the play begins, we never leave the stage!’

Fortunately the girl’s experience of waitressing means they have seen most of the characters that frequent the cocktail bar and can use this to create the characters. There’s the local lads who have come in for a ‘Slow comfortable screw’, the name -dropping TV producers and, of course, the girls who work all week in the local supermarket saving up their money so they can blow it all on a night on the town! ‘We’ve all seen different versions of the generic characters who feature in the play’ commented Caroline Bayfield ‘You see all sorts as a waitress, those customers who think they are better than you, the drunk ones and the lads who are trying to get off with you; and we get to play them all in Shakers!’

BrassNeck audiences are being treated to a double bill as Godber’s most famous play, Bouncers, will be performed on the same evening. Again, Bouncers only has four performers who never leave the stage only this time the cast are all male. In direct contrast to the girl’s experiences, none of the bouncers have ever actually been employed as Bouncers and therefore have to create the characters from nothing; although one of the cast, Richard Lloyd, was very nearly a real life doorman.

‘I was living in London and I went to a real dive of a night-club; one of those where your feet stick to the floor. I was asked if I’d ever thought about being a Bouncer and would I consider it? I’d had a few beers so I said I’d go along to meet them the next week but when they started talking about knives, one-in, all-in policies and even a gun culture in the area I decided against that particular role!’ Said Richard 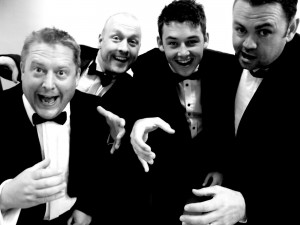 Bouncers and Shakers is a night not to be missed, an hilarious riot of an evening that will leave you wanting more. Tickets are on sale and understandably going fast so book now to make sure that you don’t miss this fantastic production from this great theatre company. If you haven’t seen a BrassNeck show yet you really have missed out. The theatre is set out to feel like a nightclub and the audience sit around tables whilst the play is on; drinks can be enjoyed at the table throughout the night. Balcony seating is also available.