Phil’s weather eye out for role in The Full Monty

Local actor Phil Yeadon can be forgiven for keeping a keen eye on the weather forecast for May as he prepares to get his kit off reprising the lead role of Jerry Lukowski in BrassNeck Theatre’s upcoming production of The Full Monty.

Phil last played the role in 2008 to sell-out audiences and the popularity of the show is as strong as ever. Only weeks after the box office opened, tickets have been flying out with very few left already for the Friday and Saturday night performances Phil says: “People can be mistaken for thinking The Full Monty is just about six blokes stripping. Yes, the audience will certainly get that but the story, along with a fantastic musical score, make this show a great night out for all. Many local audiences are used to being able to turn up on the night to see a show but the way tickets are selling at the moment I recommend that people book in advance or risk missing out. I just hope it’s not too chilly on the night!”

The Full Monty tells the story of a group of unemployed steelworkers as they come up with a bold plan to make some quick cash after seeing how much their wives enjoy watching male strippers during a girls’ night out.

Directed by Royston Bayfield with musical direction by Tom Kyle and choreography by Donna Woodman, BrassNeck Theatre have brought together a talented cast. 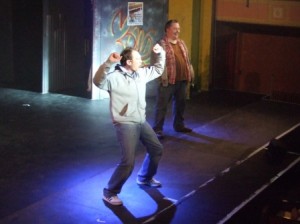 Explains Royston Bayfield: “At the auditions for this production Phil displayed all the ability that I remembered from his previous performance in the role of Jerry, making him the obvious choice for the role and I am delighted that Richard Lloyd was cast in the supporting role of Dave again as the chemistry between these two talented actors is incredible. These are the only two ‘strippers’ that performed in our previous production as the BrassNeck Theatre name continues to draw in some of the most talented performers in our region.”

The Full Monty runs at Yeadon Town Hall from May 15 to 19. Tickets can be booked by calling the box office on (0113) 2505011 or by e-mailing boxoffice@brassnecktheatre.com. People are being encouraged to book for the mid-week performances to ensure the best seats.