BrassNeck Theatre has put together a fantastic season for local audiences to enjoy, starting with the hilarious and moving Calendar Girls next month.

This is followed by a new and innovative production of the classic Fiddler on the Roof in November, and is rounded off with the smash-hit Andrew Lloyd Webber musical Whistle Down the Wind in May 2013.

Based on the true story of 11 WI members who posed nude for a calendar to raise money for the Leukaemia Research Fund, Calendar Girls opened at the Chichester Festival Theatre, and has since become the fastest selling play in British theatre history.

When Annie’s husband, John, dies of leukaemia, she and best friend Chris resolve to raise money for a new settee in the local hospital waiting room.  They manage to pursuade four fellow WI members to pose nude with them for an ‘alternative’ calendar, with a little help from hospital porter and amateur photographer Lawrence.  News of the women’s charitable venture spreads like wildfire, and hordes of press soon descend on the small village of Knapeley in the Yorkshire Dales.  The calendar is a success, but Chris and Annie’s friendship is put the the test under the strain of their new-found fame.

As always, BrassNeck has assembled a superb cast and the girls, along with other company members, were privmeet the cast of the professional tour when it came to The Grand Theatre in Leeds recen 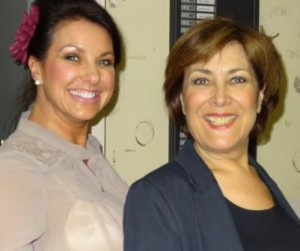 Laura Judge, of BrassNeck Theatre, with Lynda Bellingham, who starred in Calendar Girls at The Grand Theatre in Leeds

The actors chatted to the BrassNeck girls about the show, and gave them hints and tips about their characters, as well as wishing them the best of luck for the play in September.

It is no surprise Calendar Girls is selling extremely well, and is expected to be a total sell-out, so book early to avoid disappointment.  Call the BrassNeck box office on 0113 2505011 or book online at www.brassnecktheatre.com.