Ticket sales taking off for The Full Monty!

When BrassNeck Theatre performs The Full Monty from 15-19 May next month at Yeadon Town Hall, the actors are hoping to be playing to full houses. Not only is it the clothes that are being taken off but the ticket sales too with both the Friday and Saturday nights almost 90% full already.

BrassNeck Theatre box office manager Barbara Matthews is delighted at ticket sales and keen to see the show become a sell-out. ‘At this point, with 6 weeks to go, I would expect us to be around 40/50% full as we sell a lot of our tickets in the final run up; The Full Monty is over 70% sold already!’  Said Barbara ‘I would urge anyone wanting to come to see the show, especially on either the Friday or Saturday evenings to get their tickets whilst they still can’. 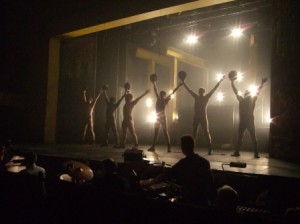 The musical of The Full Monty follows the same story of six unemployed steel workers trying to make some money by becoming strippers that made the 1997 film starring Robert Carlisle a worldwide phenomenon. In the process of putting the show together the guys find renewed self-esteem, the importance of friendship and the ability to have fun. As the guys work through their fears, self-consciousness, feelings of worthlessness and anxieties (over everything from being overweight to child custody, bigotry to being gay), they come to discover that not only are they stronger as a group, but that the strength they find in each other gives them the individual courage to face their demons and overcome them.

In 2008 Stampede Theatre, one of the founding companies of BrassNeck Theatre, performed The Full Monty to rave reviews; many of the same cast members have come together again for this production. Phil Yeadon and Richard Lloyd again take on the two leads whilst Rachel Sowerby and Lisa Simpson – Richard’s Wife in real life – will play their partners for the second time. Having wowed audiences playing Roger de Bris in The Producers and Les in Bouncers, Andrew Walton will make his third appearance for the company in a year when he takes on the role of the lads ex boss, Harold.

The Full Monty is to be performed at Yeadon Town Hall from 15-19 May at 7.30pm each evening. Tickets are still available for every performance with the best availability being for the Tues, Wed and Thurs evenings. To get your tickets ring the BrassNeck box office on 0113 2505011 or email boxoffice@brassnecktheatre.com.  Make sure you don’t miss out on another fantastic BrassNeck Theatre production, order your tickets now!