One month to go before the big hike! 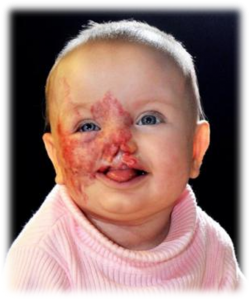 Chloe Rose Monte was born on 3 March 2009, (one of twin girls) and was subsequently diagnosed with a segmental facial haemangioma which is a type of tumour of the blood vessels. Chloe’s condition quickly deteriorated, her face ulcerated and she became very poorly. Unfortunately Chloe lost some tissue from her face which will have to be repaired with reconstructive surgery throughout her childhood. She also needed a peg feeding tube fitted to feed her directly into her tummy to make sure that she gets the nutrition she needs. Chloe has had numerous hospital stays since her birth in Leeds Children’s Hospital and a spell at Great Ormond Street in London and has the support of community nurses at home.

The great news is that although it will be a long journey, Chloe is doing really well and enjoying life with her twin sister Amelia Grace.

As a family, The Montes are really grateful for all the care Chloe has received and would like to give something back, and so Chloe’s Appeal was born.  The appeal is current nominated charity for BrassNeck Theatre.

Chloe’s Appeal raises money for Great Ormond Street Hospital and Leeds Children’s Hospital, the latter of which is the beneficiary for this fundraising event.

The Three Peaks Challenge takes in the three biggest hills in Yorkshire; Ingleborough, Pen-y-Ghent and Whernside.  Our group of intrepid adventurers from BrassNeck Theatre will be aiming to complete the 25 mile journey in 12 hours, although we are very much a mixed ability group and some may only complete two of the peaks (we don’t want to end up costing the local Mountain Rescue charity any money by having to come to rescue anyone!).   Those completing all three peaks will clock in and out at the Pen-y-Ghent café in Horton-in-Ribblesdale to be given an official completion time.

To raise £1,000 from this event.  This could pay for, amongst other things, a distraction wall in one of the treatment rooms (to make the uncomfortable treatment of children much easier), two lap tops for children to use for either homework or personal use during their time as in-patients or 4 televisions to be installed in the wards.