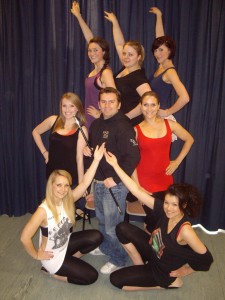 As final preparations are taking place for next weeks’ BrassNeck Theatre production of The Producers, seasoned performer Tom Kyle has been busy honing his new-found tap dancing skills for his role as Leo Bloom, the timid accountant turned Broadway producer.

Tom has taken time out from his day job as International Officer at The University of Leeds to learn the demanding tap skills required for his role in the Mel Brooks multi-award winning smash hit musical.  “Leo has to transform from a shy, unassuming accountant into a stereotypical Broadway tap dancer in the space of one musical number” explains Tom.  “I’ve spent a lot of time in the studio with our choreographer Briony Marston.  She’s certainly put me through my paces but I’m confident that all the hard work has paid off.”  Tom plays alongside Richard Lloyd as Max Bialystock, the role made famous by Nathan Lane in the 2005 film, Broadway production where it grossed more than $200 million becoming Broadway’s biggest hit in 25 years and later the West End production that was described by The Evening Standard as “a once-in-a-generation must-see cultural phenomenon”. 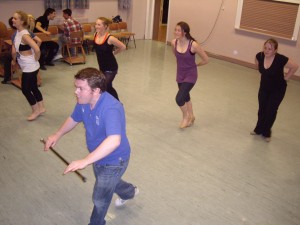 “I wanna be a producer” mid-rehearsal

Director Royston Bayfield pays tribute to the hard work undertaken by Tom and the rest of the cast of The Producers, “Its testament to the professionalism of Tom that he can take on a challenging role such as Leo and learn a difficult new skill in tap dancing whilst still working full time.  But Tom is just one of a team that have all been working extremely hard to put together what is set to be a must-see piece of musical theatre.  Along with the rest of the production team I am very proud of what the cast have achieved, and truly believe that we have done justice to the brilliant writing by Mel Brooks.  Even non-theatregoers won’t fail to be entertained by this production and I heartily recommend it to all.”

The producers runs from 17 – 21 May at Yeadon Town Hall.  Tickets are still available for mid-week performances although the Friday and Saturday nights are almost sold out already.  Bookings can be made by calling the box office on 0113 2505011 or by emailing boxoffice@brassnecktheatre.com.